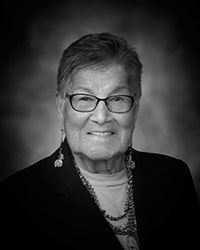 Bertha Skye is a valuable and influential leader at a critical time.

Her service to students, faculty and staff members as an Indigenous elder at McMaster University, Sheridan College and Mohawk College, her award-winning work as a chef, and her heartfelt efforts to achieve genuine reconciliation between Indigenous and non-Indigenous communities make her an example for all to admire.

Skye was born in northern Saskatchewan where she began to hone her passion for traditional cooking. At the age of 17 she began her culinary career as a cook for the Prince Albert Residential School. At the 1992 World Culinary Olympics, Skye competed on a team of Indigenous chefs that won 11 medals, the most of any team, including the Grand Gold Medal.

For over a decade, Skye has served as an Elder for McMaster University, Sheridan College and Mohawk College, which recently recognized her as a Distinguished Fellow. She has guided students through the sometimes turbulent and delicate experience of post-secondary education, with support, guidance, laughter, friendship and, of course, healthy meals.

She moved to Six Nations of the Grand River more than 50 years ago, after meeting her husband Hubert Skye, and today she is the mother of three daughters and two sons and the grandmother of six grandchildren and two great-grandchildren. She is also a volunteer board member with the Six Nations Health Foundation.

Throughout her lifetime, Skye has educated, supported and fostered understanding among Indigenous and non-Indigenous colleagues, earning wide respect in all her communities.