From February 6 - 10, filming will take place near the area of the branch. Please advise that loud sound effects may be heard throughout this time. A large volume of film equipment and vehicles will be present, however, Member parking will still be available.

The History of the Bookmobile 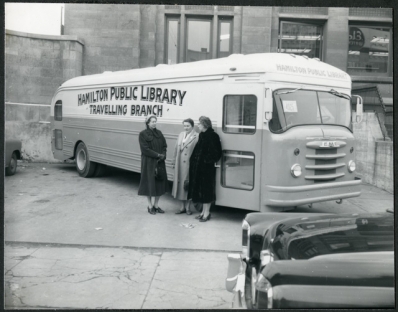 HPL staff, including Chief Librarian Freda Waldon, with the Travelling Branch on December 4, 1956 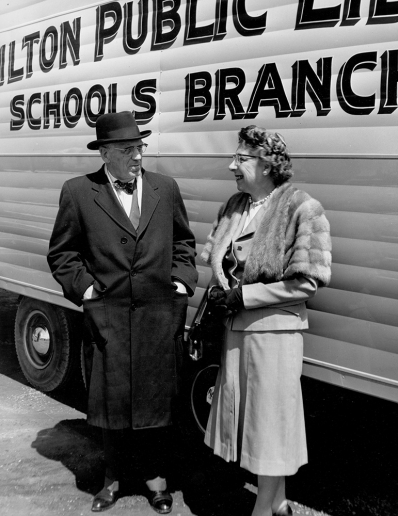 Our library on wheels is a very special and unique part of HPL’s public services, allowing us to go beyond the brick and mortar and connect with our many communities in the city of Hamilton.

The first time there was a mention of having a travelling branch for the Hamilton Public Library was in an article in Globe & Mail dated November 16, 1949. Then Chief Librarian Freda Waldon mentioned the idea of having a travelling branch whose chief function was to serve outlying areas beyond a one mile radius from existing library branches. It wasn’t until May 7, 1954 that talks of a possible bookmobile was discussed in city council.

Two years later, on December 20, 1956, the first bookmobile rolled onto the streets of Hamilton.

In a Hamilton Spectator article dated January 5, 1957, they talked about how the five stops of the Bookmobile were very popular among children, citing an example of one boy who went back five times, each time bringing someone with him and encouraging them to register for a library card. Another proof of the Bookmobile’s popularity was its February 1957 circulation exceeding that of the Main Library’s circulation.

Now, the Hamilton Public Library has two bookmobiles and services 12 neighbourhood stops and 25 senior residences. For 2014, the Bookmobile’s circulation was at around 123,000. Since October 1973, our bookmobiles have also offered movies in its collection.

The Bookmobile will continue to serve communities that do not have a library branch in their vicinity and provide materials for seniors who cannot travel far anymore. Our friendly staff will surely provide a personalized service and find the perfect material for you.

Find a Bookmobile stop near you!