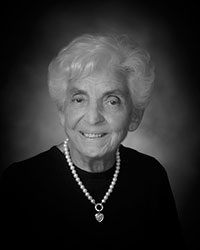 Patricia Saunders’ commitment to the quality of life in Hamilton appears to know no boundaries. The extraordinary volunteer has contributed more than 60 years of service to the community, with particular focus on women’s well-being, civic engagement, mental health and local heritage. After attending McMaster University as a mature student, she graduated with Bachelor of Arts and Bachelor of Social Work degrees and went on to volunteer with the McMaster Alumni Association. Saunders was a founding member of the first Women’s Centre in Hamilton, an active member of the Hamilton Status of Women Committee, and one of the leaders who organized the transfer of its awards to the Hamilton YWCA, to become the Women of Distinction Awards. She was a founding member of the Hamilton branch of the Canadian Mental Health Association and was elected the first woman chair of the Hamilton-Wentworth Police Services Board. She continues to have an active, volunteer role with local history and heritage groups including the Women’s Canadian Club, Friends of Auchmar, the Hamilton-Wentworth Heritage Association and the Binbrook Women’s Institute to name but four. A social worker with the Hamilton Psychiatric Hospital, she helped establish the East End Mental Health Clinic, now part of the St. Joseph’s Urgent Care Centre on King Street East. She has earned recognition in every field where she has served, and her lifetime of service makes her a natural for membership in Hamilton’s Gallery of Distinction.