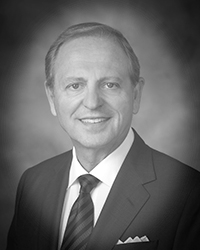 City builders come from many walks of life, but not many can claim to have literally helped build their city. Joe Mancinelli can.

Hamilton born and raised, Joe came to the construction trade early, working summers as a general labourer. This was his introduction to the Labourers International Union of North America, or LiUNA, Canada’s largest building trade union, and the beginning of a lifelong relationship. Rising through the ranks, today he serves as International Vice-President and Regional Manger for the Central and Eastern Canada.

Joe’s commitment to Hamilton includes volunteer service. He has served as a trustee at Hamilton Health Sciences, is founding chair of the Bay Area Health Trust and is a volunteer leader with St. Joseph’s Health Care. He’s been elected a school board trustee, was founding president of the Hamilton International Airport and is active with many other organizations. A talented artist, you’ll see his works on display around town including in the lobby of LiUNA Station.

For his commitment to building a better Hamilton and leading in a city shaped by labour, Joe Mancinelli enters his hometown Gallery of Distinction as a city builder, visionary and man of service.