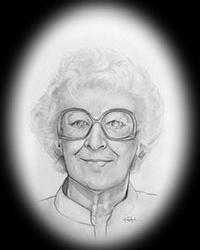 Christine Hamilton emigrated to Canada from Scotland after serving thirteen years in the Women’s Royal Army Corps. In 1957 she began work at Hamilton’s Y.W.C.A. as business manager and programmer director for children’s day camps. When the Y.W.C.A. and the City of Hamilton began joint operation of the first Senior Citizens’ Centre, Christine was named Director, a post she held until her retirement in 1986. During miss Hamilton’s early years at the Senior Citizen’s Centre, the idea for the now famous “Geritol Follies”, under miss Hamilton’s leadership, not only performs to an enthusiastic Hamilton audience but has performed at centres in the United States and Toronto